VASSIL BOJKOV COLLECTION – PAST AND PRESENT 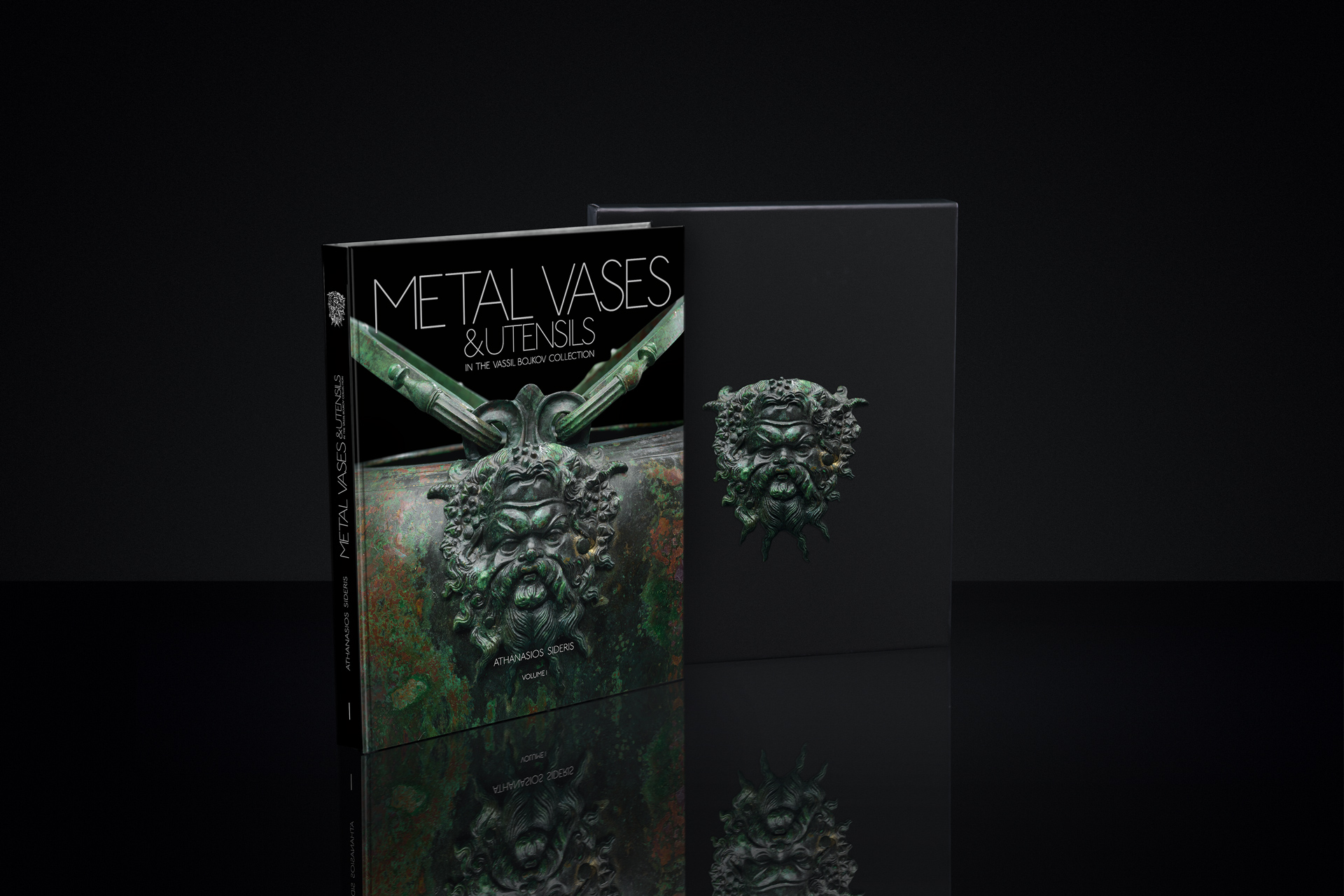 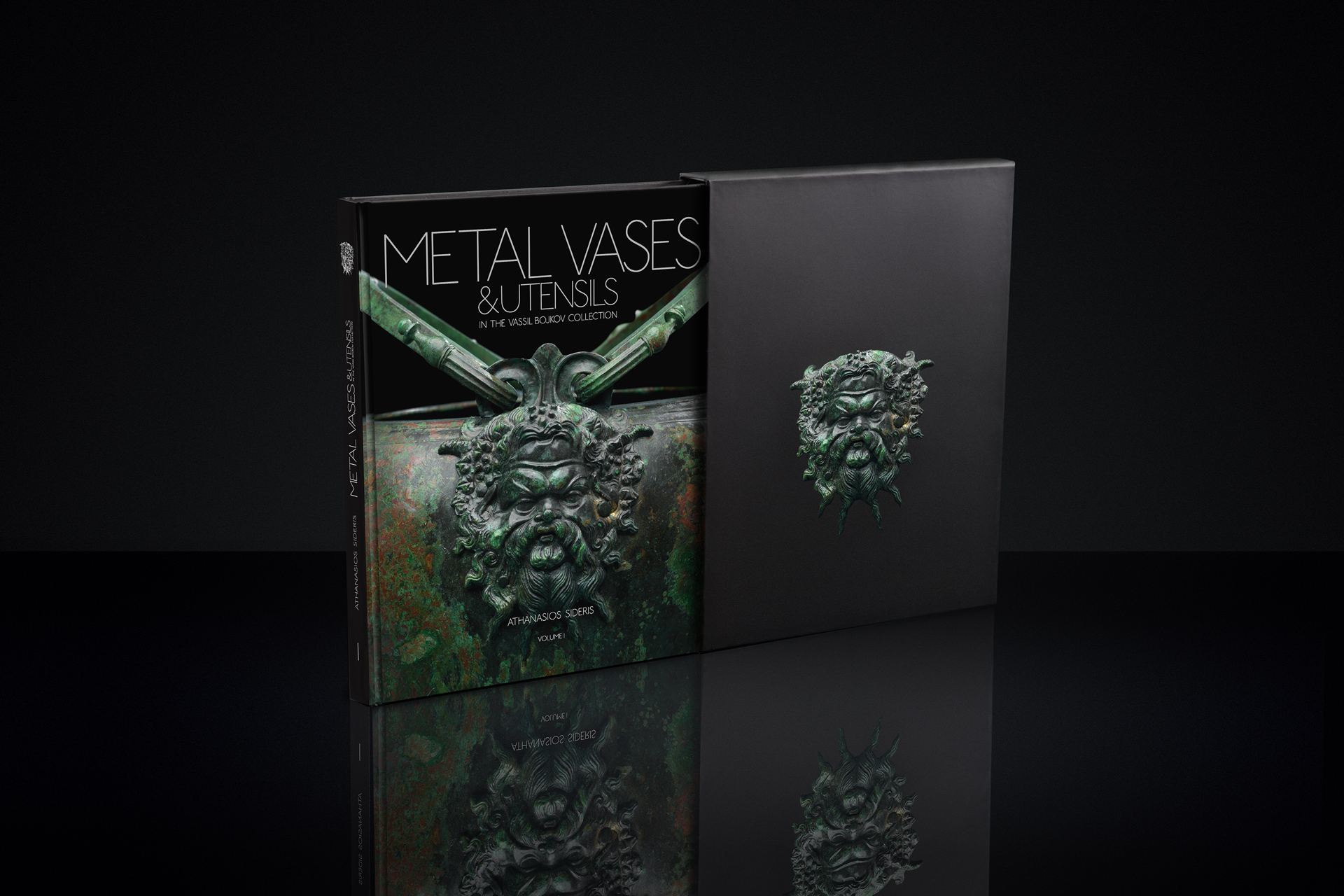 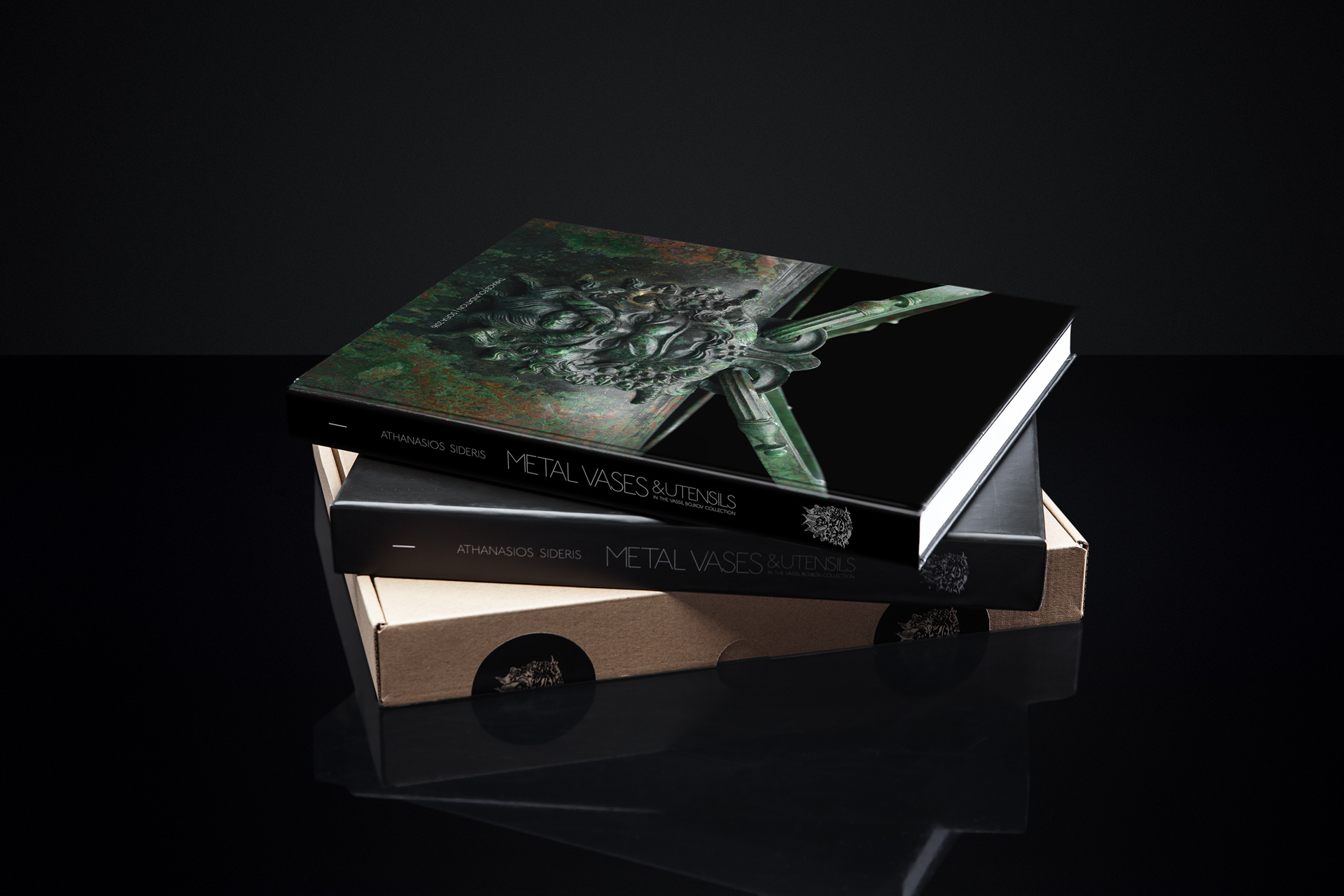 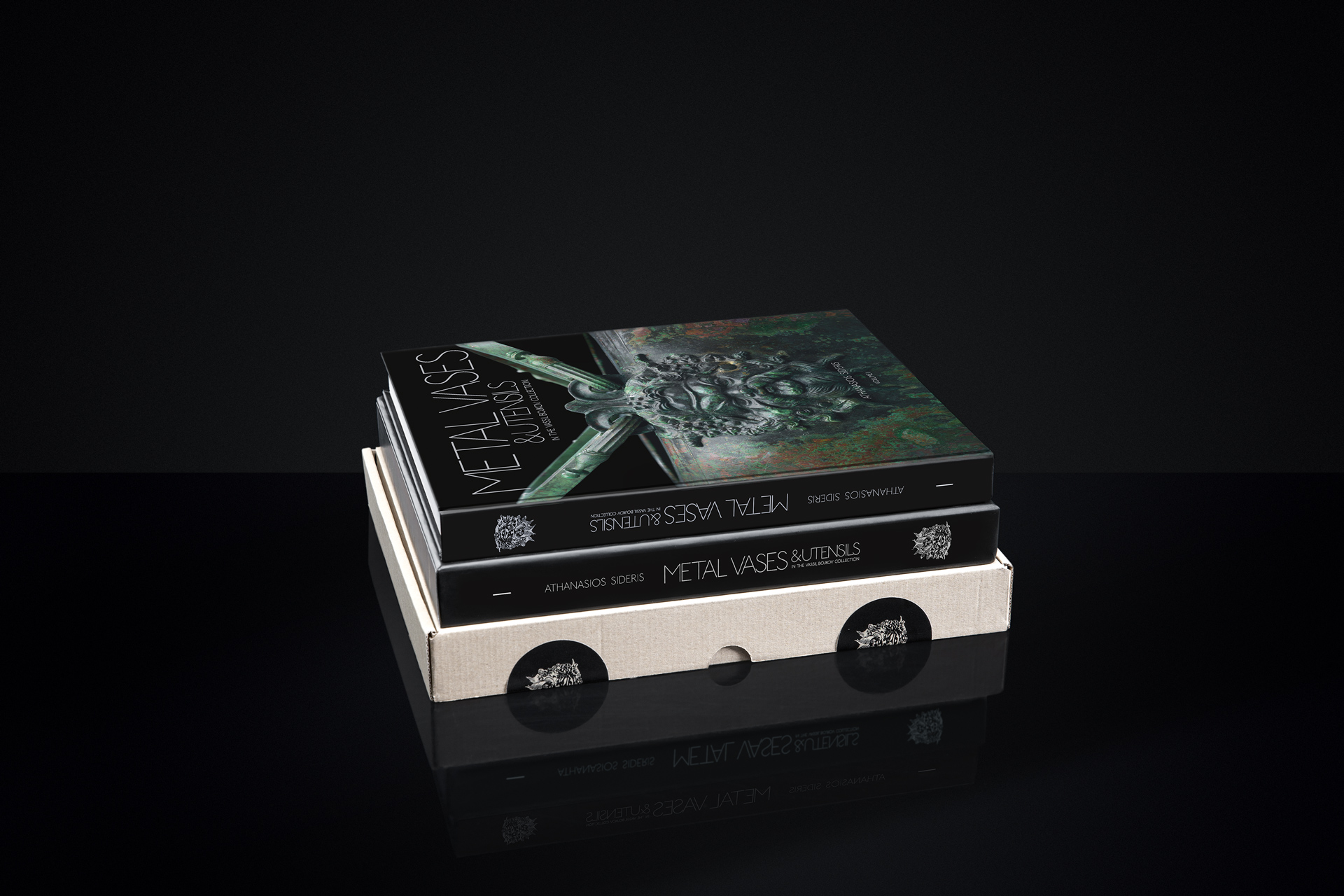 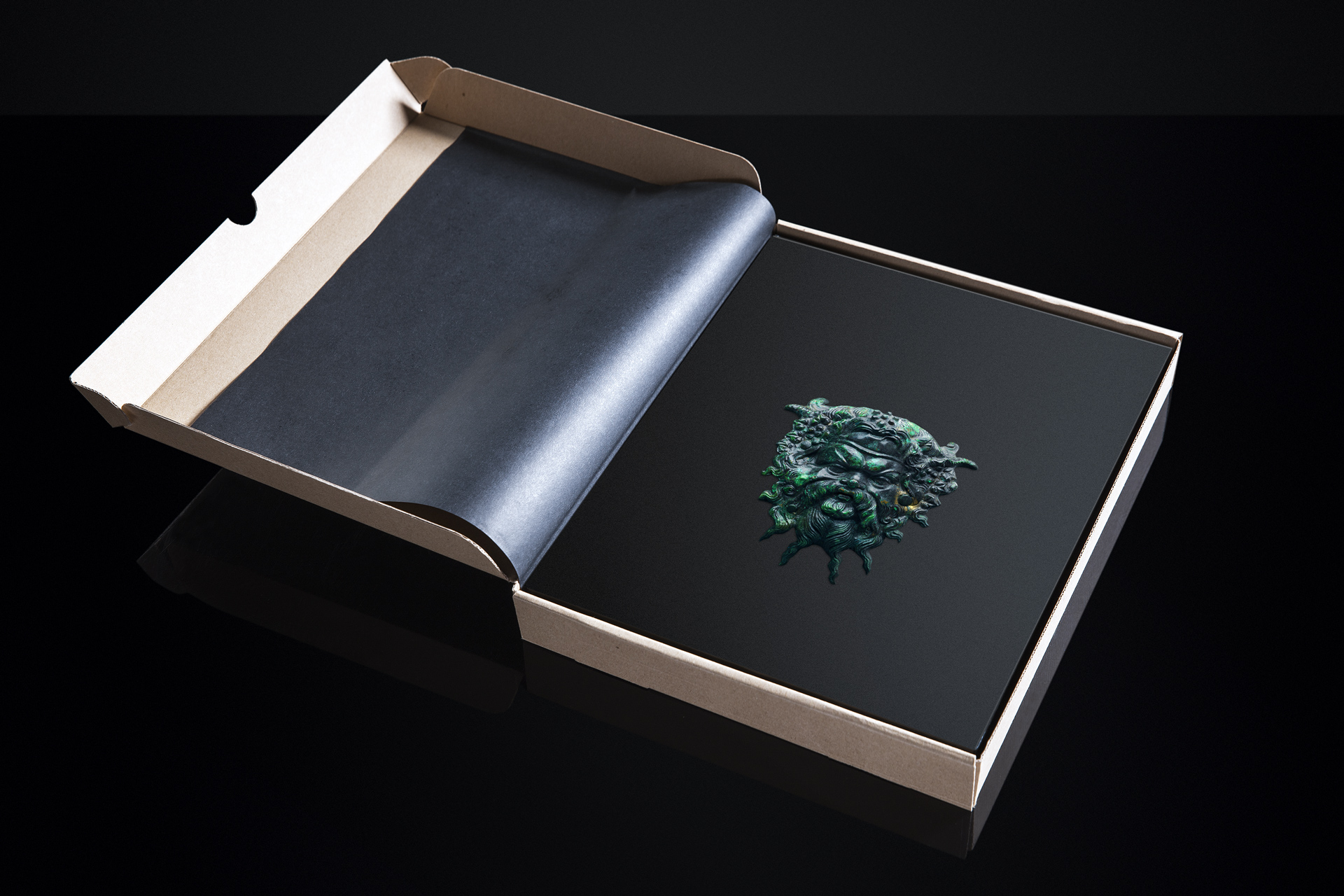 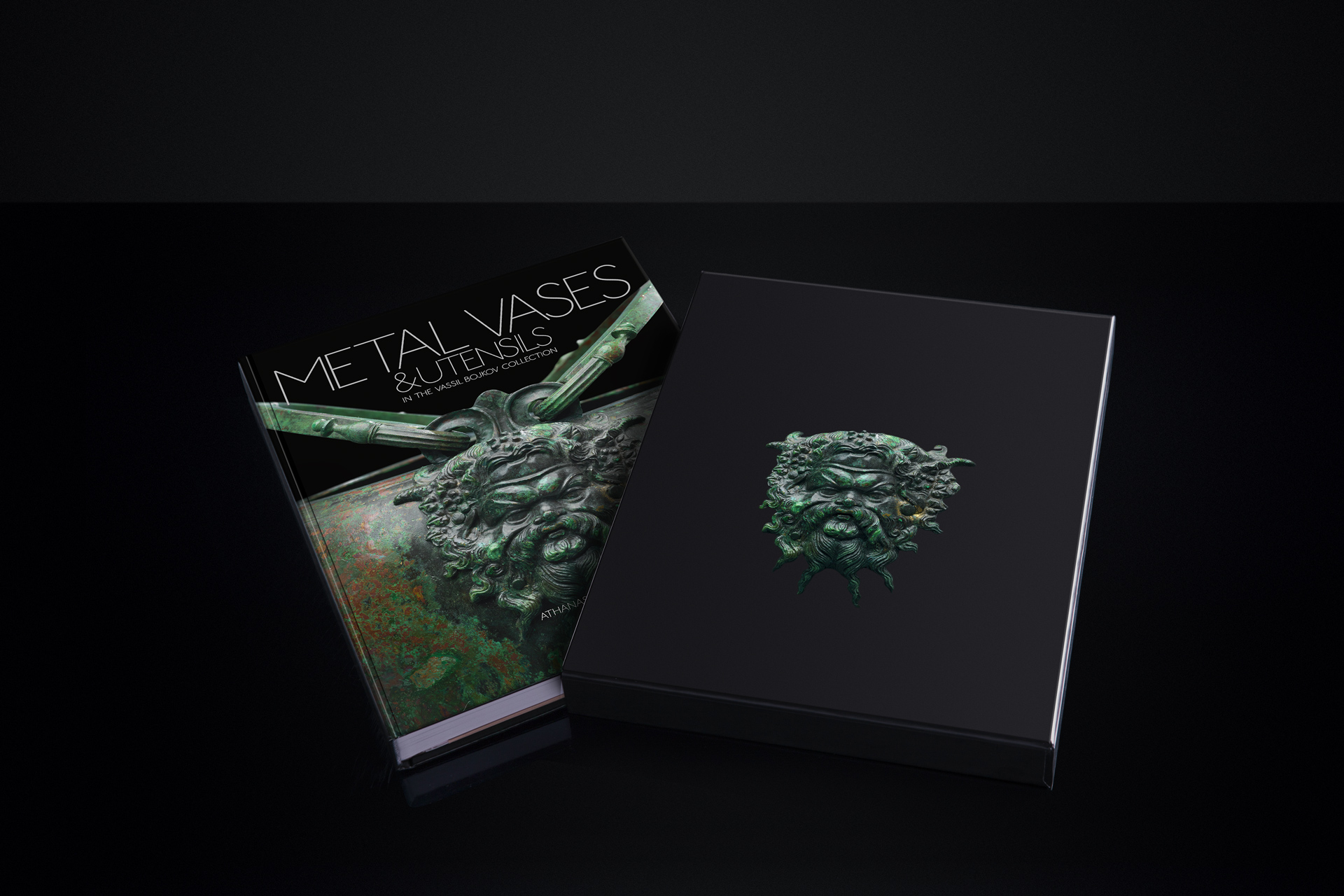 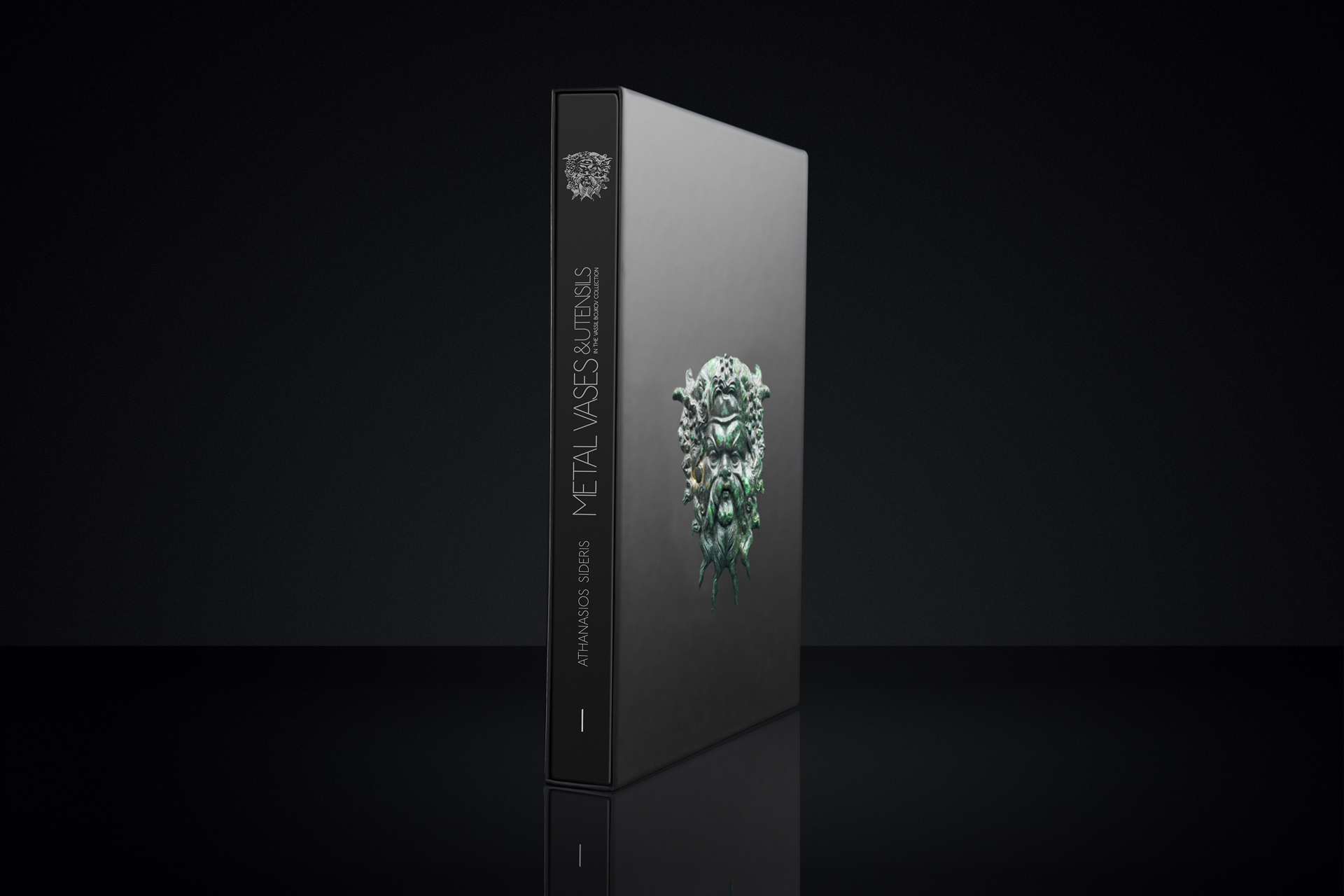 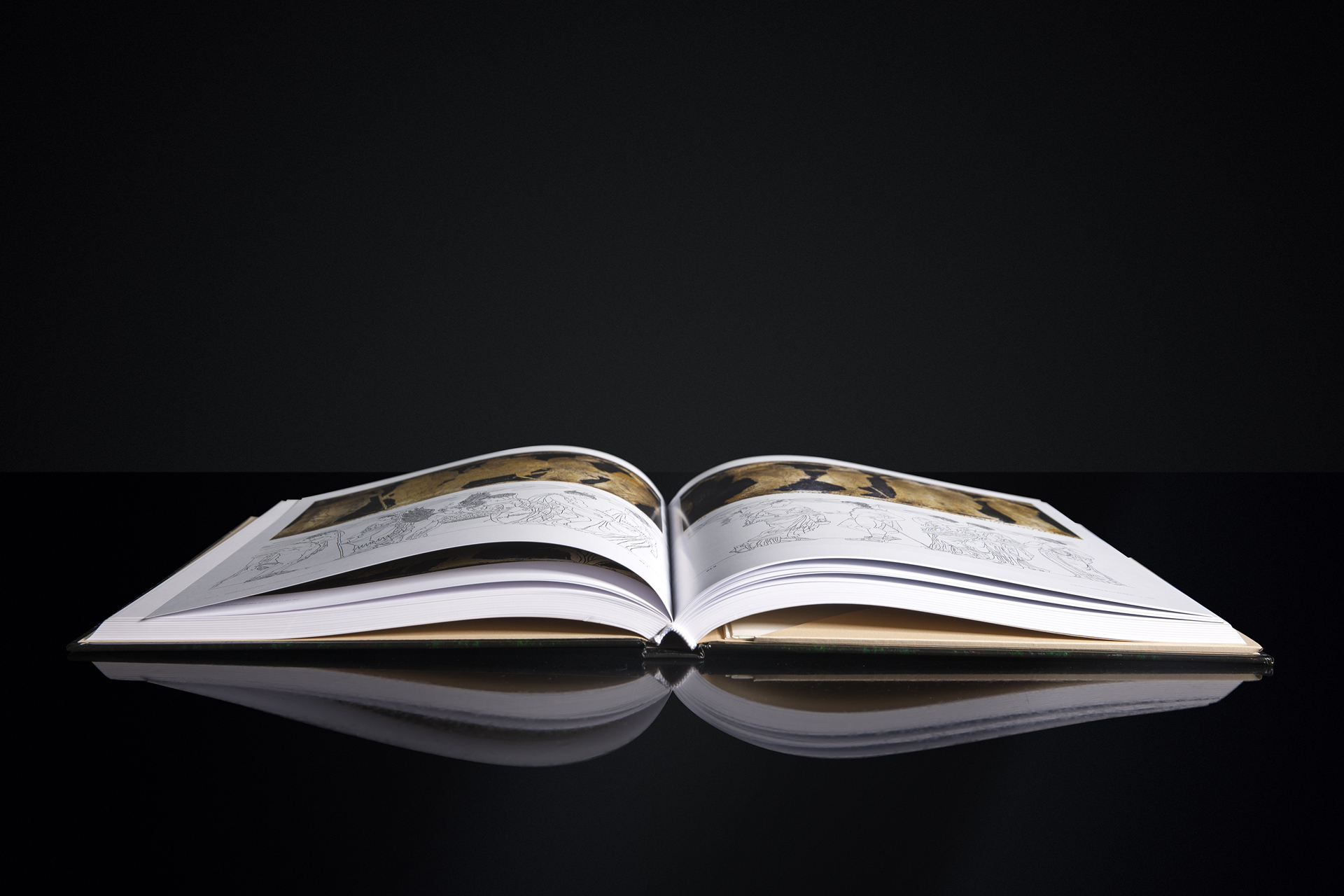 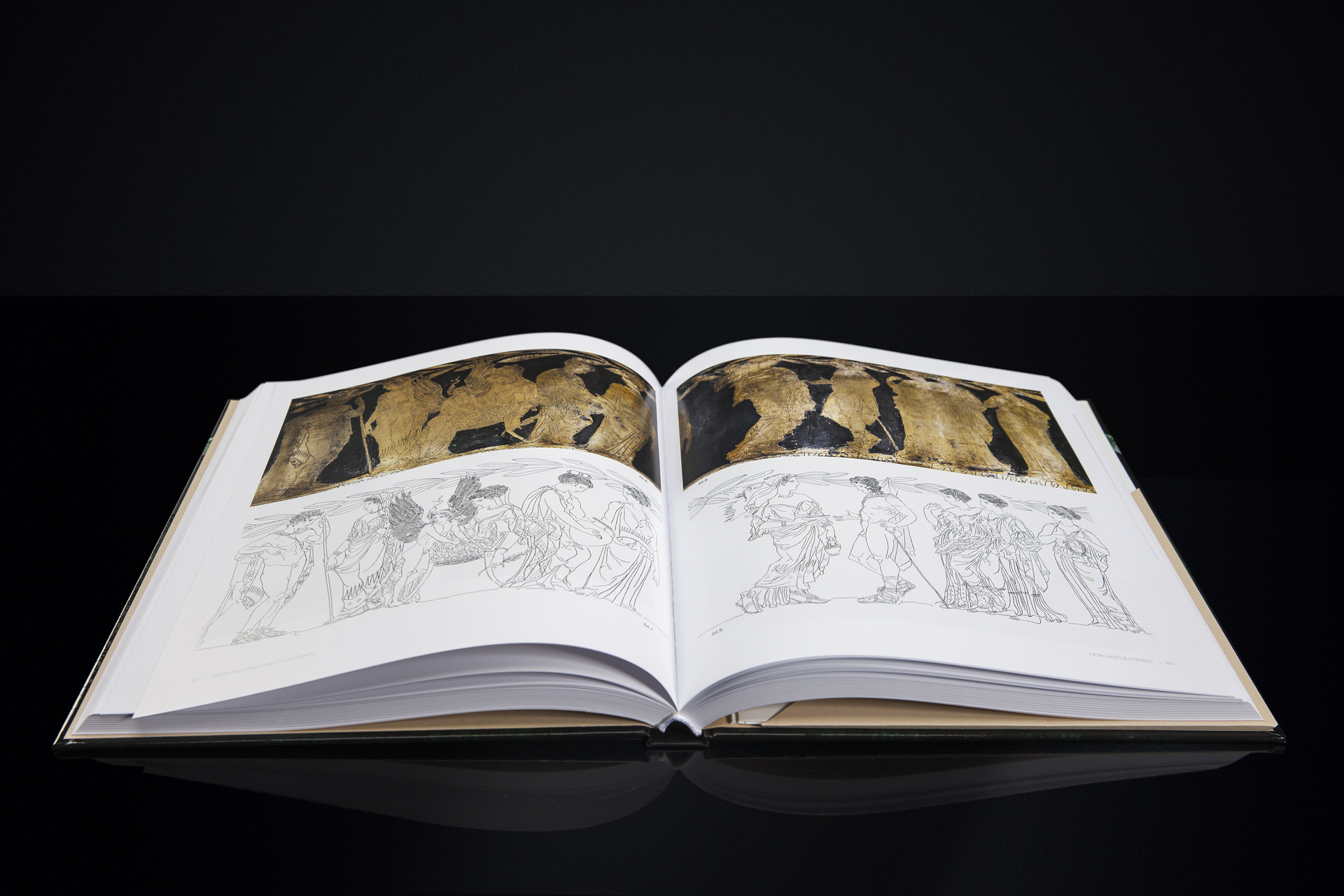 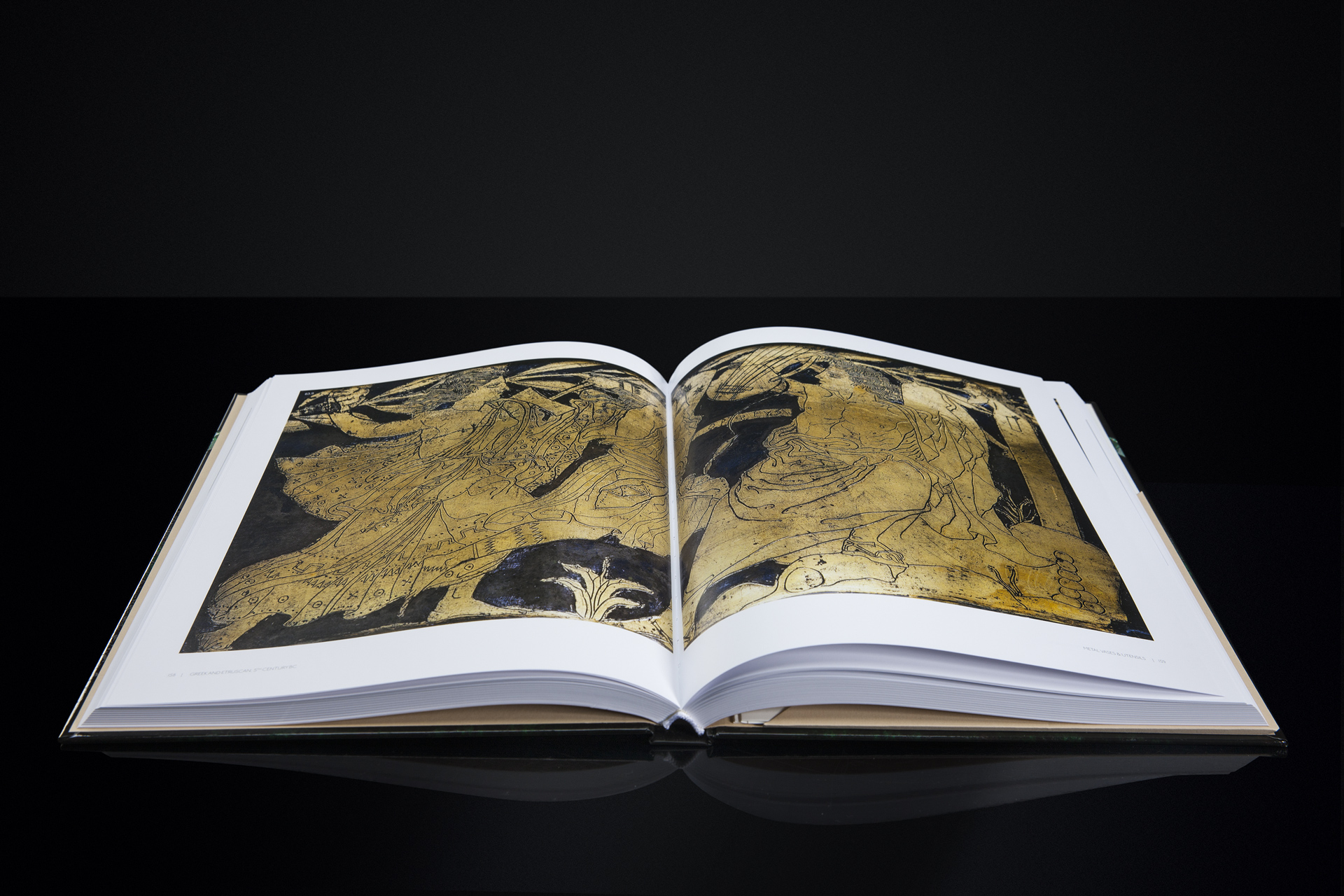 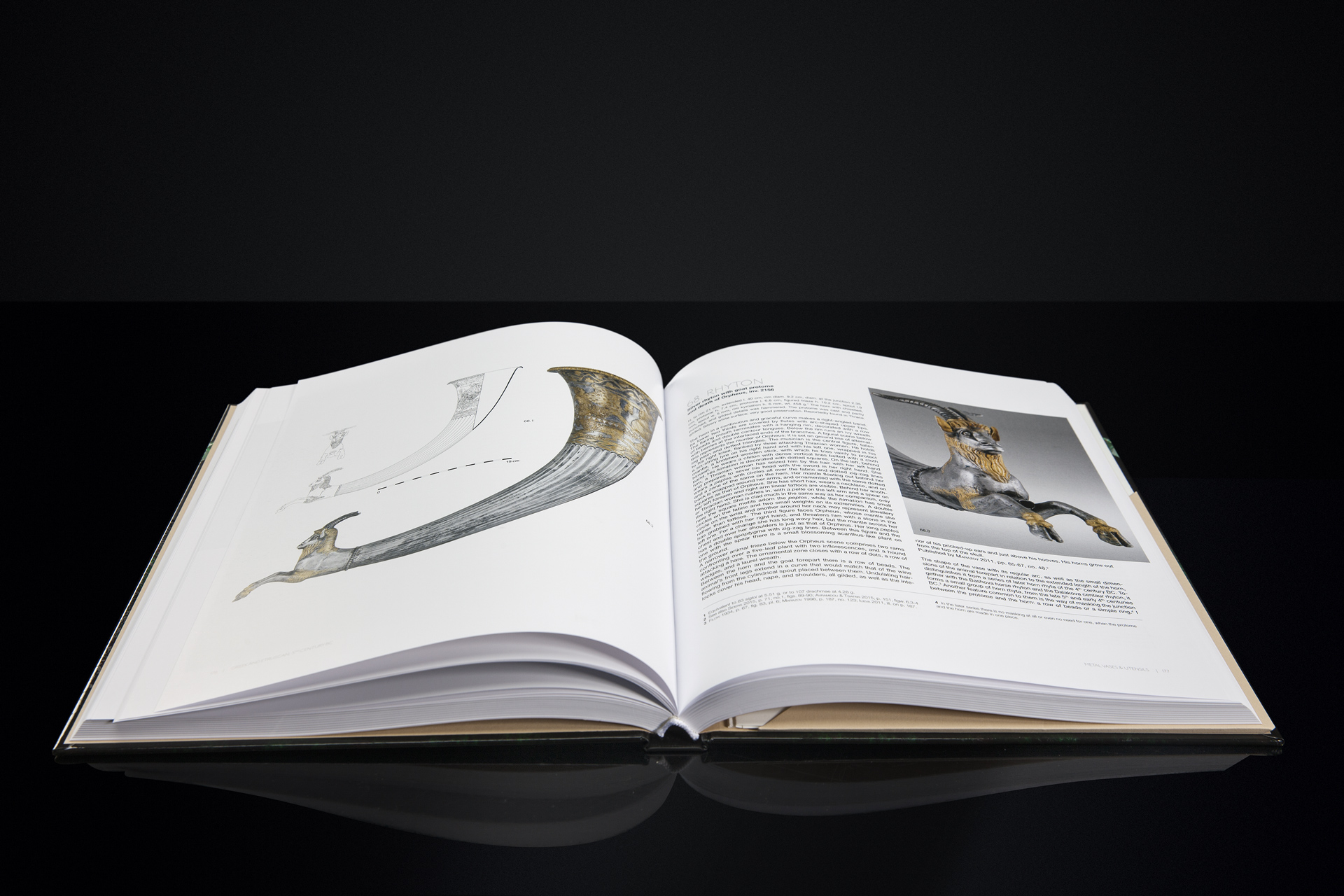 The Vassil Bojkov Collection comprises archaeological material which has entered over several years. It includes various types of art work and artifacts, made of different materials, and dating from the Neolithic period to the Late Antiquity.

Among the more significant classes of artifacts are: arms and weapons, harness parts and decorations, adornments and belt appliqués, metal and clay household and cult objects, metal and stone sculpture.

The impressive selection of bronze, silver and gold vessels represents the core of the Collection. This significant group comprises vases and utensils ranging from the 8th century BC to the 6th century AD, which were issued from workshops situated on the entire ancient world: Middle and Near East, Asia Minor, continental and island Greece, North Aegean coast, the neighboring to Greece Thrace and Macedonia, Scythia on the North Black Sea steps, as well as Etruria and South Italy (Magna Graecia). Among the most noteworthy is the group of bronze and silver horns and rhyta. The silver vases and utensils, and the various forms of silver drinking cups decorated with gilded figures represent a separate category. The Collection houses three gilded silver vases representing Orpheus, which are the sole depictions of the mythical musician known on metal vessels to this date. Equally rare on metal ware are the representations of Theseus and Helen, the famous ancient Greek heroes, which adorn some gilded silver cups and kantharoi.

The inscriptions found on some of the vases are of special value and outstanding significance. Some of them indicate the names of the represented figures, others the name of the owner of the object or the weight of the vase; at times they are short formulas of dedication, or more enigmatic graffiti and monograms. Some of the inscriptions are carefully punched, others are chased with more diligence or they are simply scratched on the metal surface.

The Collection is undergoing systematic publication in a series of volumes, the first of which is dedicated to the focal group of the pre-Roman metal vases and utensils, and includes 146 artifacts. The second volume, as well dedicated to the same group, is under preparation.

The Thrace Foundation Publishers was founded in 2004 and it is focused on issue of scientific literature, relevant to the protection of the Bulgarian cultural and historical heritage and its promotion.

The Thrace Foundation Publishers has realized the following editions:

Sideris A. 2015. Theseus in Thrace. The silver lining on the clouds of the Athenian-Thracian relations in the 5th century BC. Sofia.

Sideris A. 2016. Metal Vases and Utensils in the Vassil Bojkov Collection. Vol. 1. Sofia.

The first volume of the catalogue of Metal Vases and Utensils in the Vassil Bojkov Collection is articulated in five chapters. The first one spans the 8th to the mid 4th centuries BC and comprises Phrygian, Phoenician and other pre-Achaemenid vessels from the Middle and Near East and Anatolia. It includes as well several Achaemenid creations, many of which represent the Lydian toreutic school, while distinctive traits on others betray the intensity of the Achaemenid contacts with the Greek cities of the Propontis and the Aegean coast of Asia Minor.

The second chapter deals with the Greek toreutic output of the Archaic period, with artefacts ranging from the second quarter of the 6th to the first quarter of the 5th centuries BC. It represents all the major centres: Laconia, Corinth, Ionia, Western Greece and Magna Graecia.

The third chapter contains creations of the same centres, to which now Athens, Argos, Campania and Etruria are added. It encompasses the period between the end of the Persian Wars and the end of the Peloponnesian War. The Athenian and Athenian-related silverware of this period forms a distinctive group, the technical perfection, the aesthetic value and the outstanding significance of which place the Vassil Bojkov Collection in the leading position among the museum collections of Classical toreutics worldwide.

The fourth chapter deals with the entire 4th century BC: it comprises almost exclusively Greek works issued from already well-established centres, like Corinth and Athens, now joined by those of South Italy and Macedonia. During this century, Macedonia, Thrace and Scythia reach unprecedented heights in the use, grave deposition and, presumably, production of metal vases, especially those of precious metals: a phenomenon undoubtedly related to both the expansion of the Greek cultural model, and the sudden influx of huge amounts of wealth, originating from the acquisition of the Achaemenid royal treasuries. Some vase-types, such as situlae, oinochoae and cups, display no breaks in their evolution at the end of the Classical period. Therefore their development is followed until the turn of the 4th century, when a more conspicuous change occurs in the trends and fashions of the material culture, as a result of profound shifts of power and of the economic epicentres taking place outside the Greek peninsula.

The last chapter collects material from the 3rd to the early 1st centuries BC, mostly cups, from areas once considered as the periphery of the Greek world, but now becoming the emerging centres of the Hellenistic ecumene.

Each entry of the catalogue has a brief main heading, sequentially numbered, and a more descriptive secondary passage, always mentioning the material of which the artefact is made, as well as its inventory number in the collection. The body of the text of each entry is divided into three sections: the technical description – printed in slightly smaller characters – followed by the physical description of the artefact and the discussion. The 146 artefacts presented in this volume are illustrated by 388 pictures and 110 drawings, and their entries are supported by 111 pictures of comparable artefacts in other collections and museums.

Some 500 place names – of the find spots, the production centres, and the regions mentioned in the text – are shown on the three accompanying maps. The catalogue concludes with three indexes (personal names, place names, general index), followed by a list of the 21 inscriptions and graffiti, a list of figures of the comparanda, and a concordance list, intended to facilitate the identification of the entries in the current volume with those in the previous publications of the Thrace Foundation.

ACKNOWLEDGMENTS TO ALL INSTITUTIONS AND PERSONS WHO PROVIDED PHOTOGRAPHS 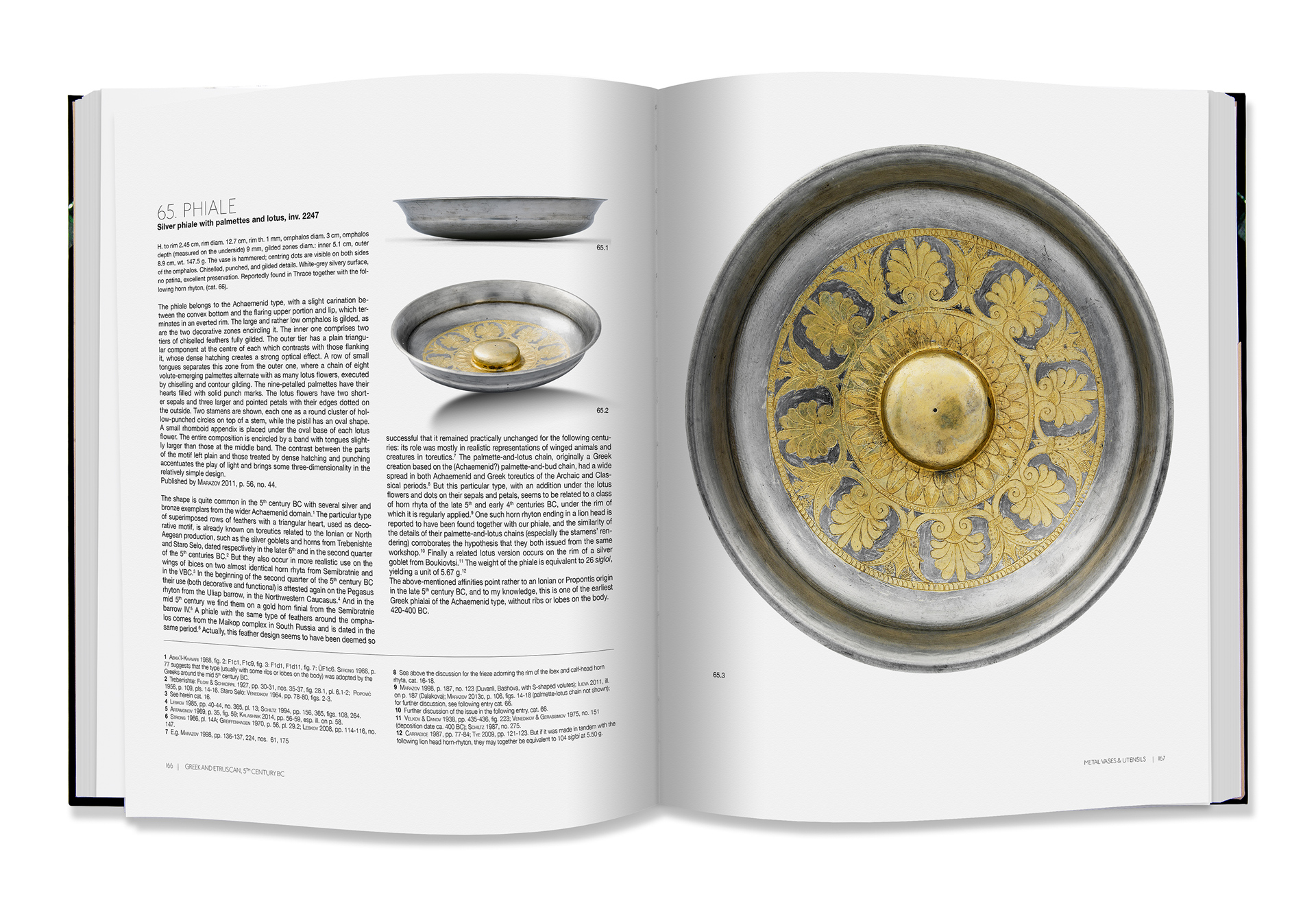 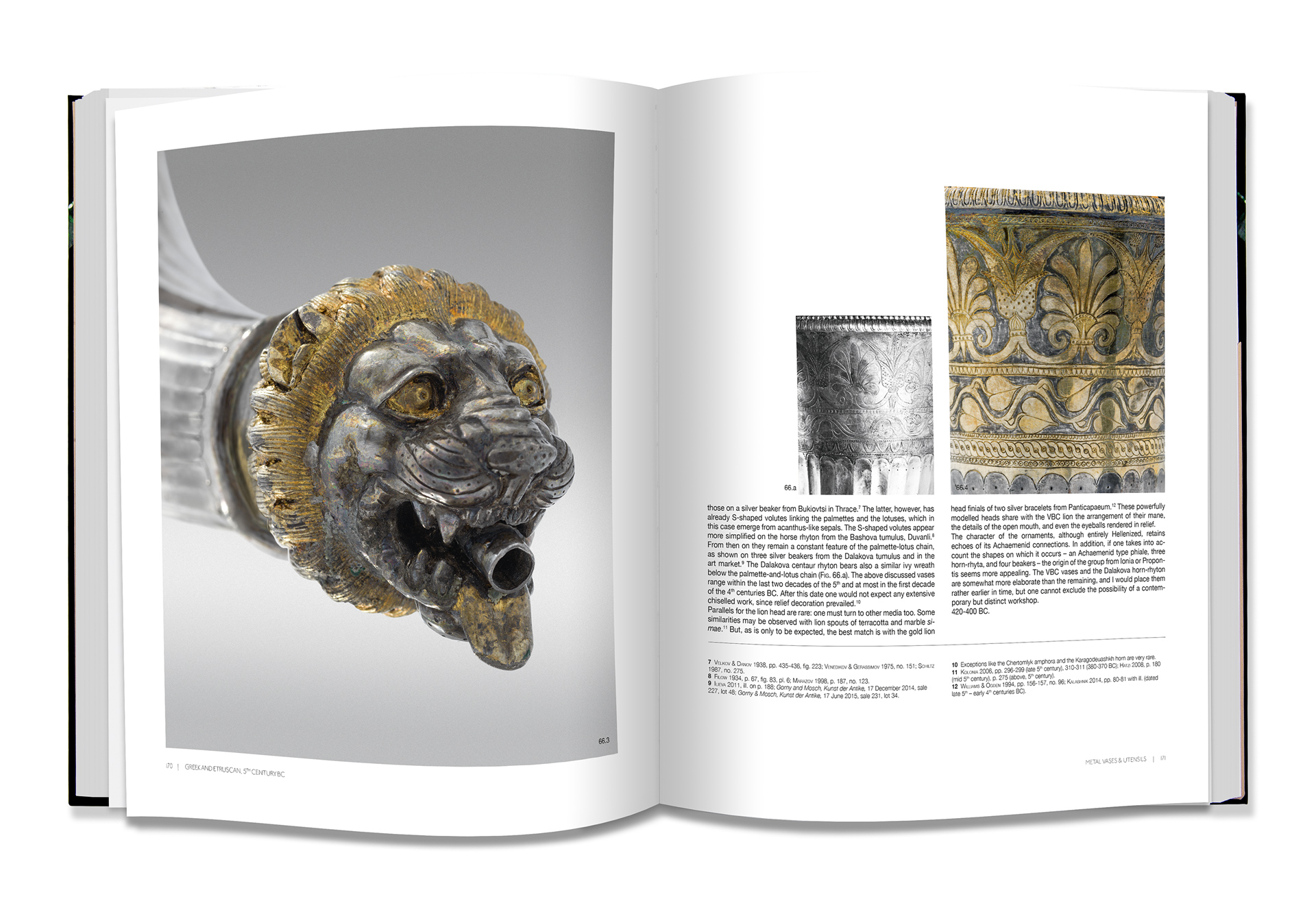 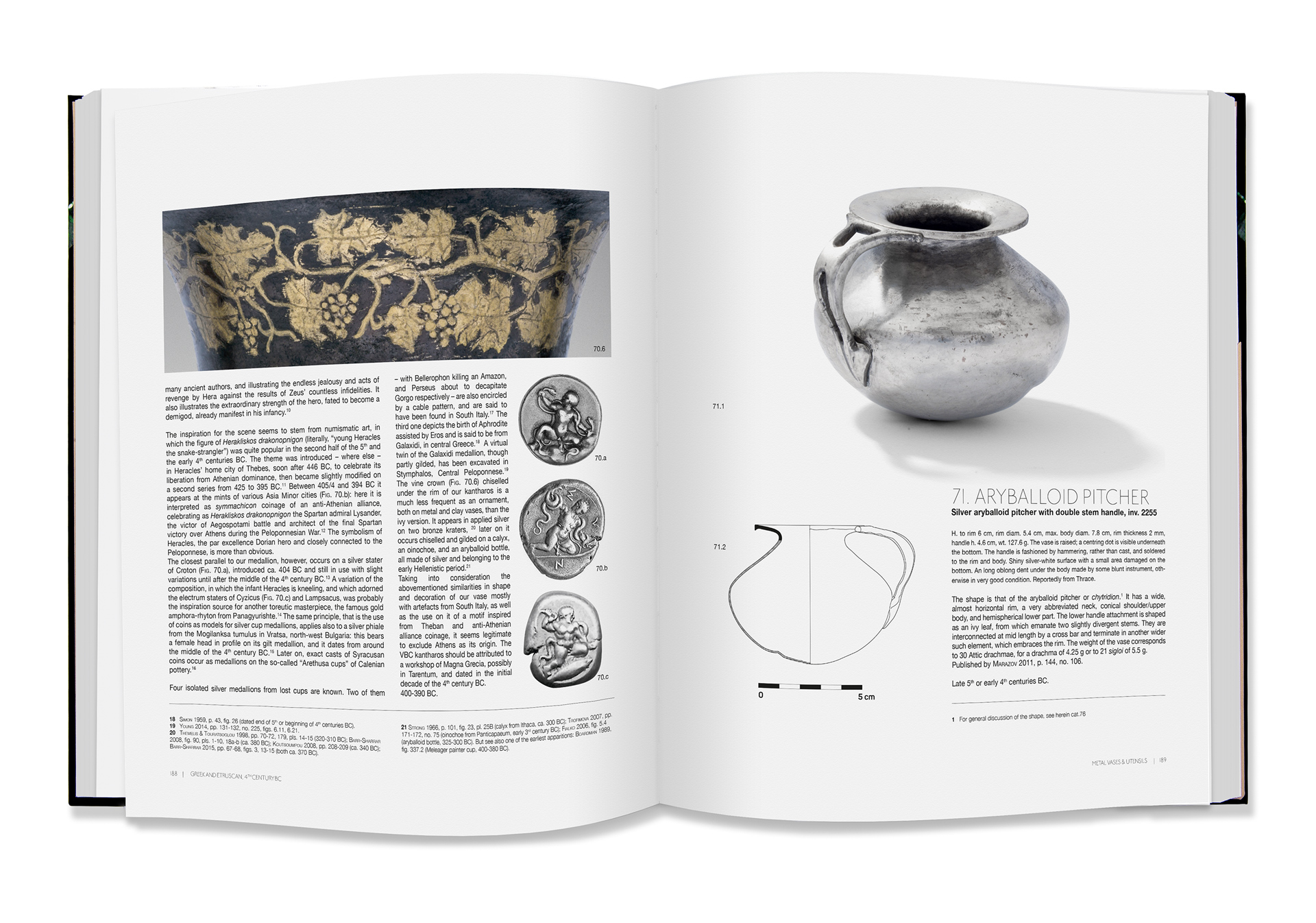 Dr. Athanasios Sideris is a Classical archaeologist with a solid background in history and art history. He studied in Charles University (Prague), Université Denis Diderot (Paris 7) and Université de Bourgogne (Dijon) with Jan Bouzek, Pierre Vidal Naquet and Claude Rolley. He is a scientific consultant of the University of the Aegean (Rhodes), on behalf of which he directs the archaeological excavations and surveys in the area of Kastrouli, Phokis, a project led in collaboration with the University of California – San Diego. In April 2011 he led the field research for the Gaugamela battlefield, in Northern Iraq, and since 2009 he co-directs the excavations in Halka Bunar, Bulgaria, in tandem with Milena Tonkova from NAIM-BAS. From 1998 to 2013 he was the director of the History and Archaeology Department in the Foundation of the Hellenic World, Athens.

His research interests encompass the economy and ecology of the Greek world, the toreutic artifacts and especially the metal vases, the Achaemenid art, the Phokian & Boeotian history and archaeology, the Graeco-Thracian & Greco-Scythian contacts, and the reception of Classics in the modern world. Dr. Sideris has in the past studied and prepared for publication toreutic artifacts from, among others, the George Ortiz Collection in Geneva, the Benaki Museum in Athens, the Shelby White Collection in New York, and the Gulbenkian Foundation in Lisbon.
He has a long teaching experience in under- and post-graduate level, including institutions such as Charles University (Prague), Ionian University (Corfu), University of Economics (Prague), Masaryk University (Brno), Polytechnico di Torino, Foundation of the Hellenic World, and Free University (Athens). He currently teaches in the postgraduate program of the University of the Aegean and he is an Affiliated professor in Charles University (under final approval).
Since 1998 he has participated in more than fifty national and EU funded projects related to the digitization of cultural resources, especially in the field of Virtual Reality and the online encyclopedias, and he was the scientific director for twenty two of them. He is a current member of the editorial board of the International Journal of Computational Methods in Heritage Science, and he has served in the past in the board of the journal Imeros, Annual of the FHW on Culture and Digital Technologies. He participates regularly in international conferences and congresses and publishes books and papers in the fields of both, archaeology and digitized cultural heritage. A detailed CV of dr. Athanasios Sideris and the full list of his publications may be found in the address: https://thracefoundation.academia.edu/AthanasiosSideris.

Selected bibliography of the author

A new publication by Thrace Foundation

Thrace Foundation just published the first volume of the projected systematic scientific catalogues of the Vassil Bojkov Collection. The collection includes various categories of archaeological material, from jewelry to marble statues. The richest and most important class of artifacts is, however, the toreutics and especially the metal vases, to which precisely is dedicated the recent volume. Its five chapters present 146 vases and utensils, of which more than half were previously unpublished, made of bronze, silver and gold.

Rare large containers, such as amphorae and cauldrons, are discussed next to exquisite silver gilt drinking cups. Vases, which have served in the prestigious social custom of the banquet, are presented along with others, which might have had ritual function. Many of them were created in workshops of the Middle and Near East and represent the aesthetic and social values of the Phrygians, the Phoenicians or the Persians. Even more exemplars come from the workshops of Peloponnese, Athens, Macedonia and the Aegean coasts. The variety of shapes, the intriguing functions, the luxurious decoration, the rarely depicted myths occurring on some of these vases, as well as the diversity of inscriptions and graffiti, are some of the characteristics, which actually range the collection amongst the richest worldwide regarding metal vases. The volume is lavishly illustrated with hundreds of high quality full color pictures of the artifacts and their details, with profile and detail drawings, and with depictions of comparative material from other museums and collections. Maps, indexes, lists and cross-references make the reading enjoyable for everyone, while the specialist is gratified with an extensive and updated bibliography to guide further research. 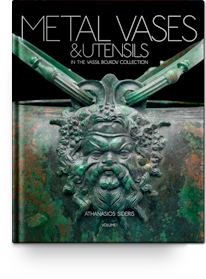